An Impression of Lochbroom – penned by Tim Gauntlett, Volunteer Director of LCR

This is an area of outstanding beauty, with spectacular mountain and lochside scenery. There are seasons when this region falls under a silent shroud, empty and peaceful, and its residents live within their own routines, often sheltering from the storms of wind and rain. Following on quickly from the first signs of Spring, there are visitors who arrive in their white four wheeled homes or travelling packs of motorbikes. Visitors from the other side of the hills, or from across the globe. They come by road, or like the tide, come and go with the ferry. They marvel at the shining light and ever changing colours, be it on the hillsides or reflections in the dancing waters of the sea.

‘We are all, only really visitors’, be we born here, here for work, lifestyle choices, retirement, or frequent visitors. However, the region, and each of its communities, strives for a common purpose, a better quality of life, be it for others or for itself, and ‘we are all the richer for it.’ Despite its draw backs of isolation and climate, people choose to live here. They are independently minded, and although value their own privacy, are generous in what they are able to contribute. People combining diversity and achievement, adding to the multi-coloured tapestry that is Ullapool, Lochbroom and its neighbouring communities.

The Community Benefit Fund will support projects across the Ullapool Community Trust area. This area covers the following Postcodes and stretches from Elphin in the North to Braemore in the South and includes the area around Loch Broom, Little Loch Broom, the Scoraig peninsula and west to Gruinard Bay. At the time of the 2011 census the area had a population of around 2350 people. 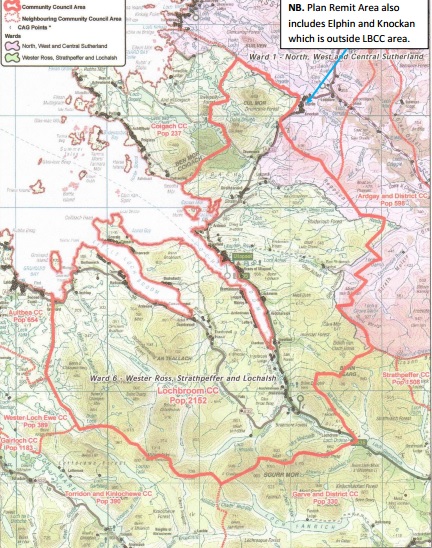 Elphin is a crofting township about 15 miles north of Ullapool. The village contains a tea-room, several bed and breakfasts and a community hall.

Half a mile south of Elphin is the Knockan Crag visitor centre, part of the North West Highlands Geopark which contains some of the oldest rock in Europe and can claim to be the birthplace of modern Geology.

Ullapool is a small fishing village around 60 miles from Inverness, the largest city in the Highlands. The village, which is on the banks of Loch Broom, was designed by Thomas Telford and established in 1788 by the British Fisheries Society as a herring port. Since then it has grown and changed and whilst the harbour is still active, tourism has come to play a vital role in the local economy. It is also a cultural centre for the area with a theatre and three art galleries and it hosts annual guitar, book, dance and rock music festivals. Ullapool is the gateway to the Western Isles via a twice daily Caledonian MacBrayne ferry service.

Scoraig is a small settlement located on a remote peninsula between Little Loch Broom and Loch Broom. It is known for its remoteness (reachable only by boat or about five miles’ walk), organic food production, and its pioneering use of wind power.

The township of Dundonnell sits at the foot of the An Teallach mountain complex, overlooking Little Loch Broom and is the base for the local Mountain Rescue.